Free Gift & UK delivery on orders £10 or more, due to Covid-19 and restricted services we regret we are currently unable to fulfil orders outside the UK

Is This The Most Pampered Pooch In Town? – ES Magazine

He eats organic, enjoys a regular pedicure and accessories with Burberry. But JJ the Weimeraner isn’t the only London dog living the high life. Anna Pursglove reports on the born in pet pampering.

JJ is a modern West London boy. He takes his morning and evening walks in Hyde Park or Kensington Gardens, has a pedicure every fortnight and is partial to Burberry accessories. He eats organic out of preference (although he enjoys the occasional fattening treat) and favours aromatherapy or homeopathy over conventional medicine. Like all Londoners, JJ sometimes finds city living stressful, so when life gets on top of him, he whips down the M4 for R & R at his Carmarthenshire retreat. It’s probably also worth mentioning that JJ is a three year old, long haired Weimaraner.

‘I don’t see anything wrong with wanting the same quality of life for your dog, that you’d want for yourself or for your family’, says JJ’s owner, Andrew Edells (who also happens to own Chelsea’s Pet Pavilion, the pet world’s answer to Selfridges). ‘It’s true that a man’s best friend can be his dog and don’t all of us want good things for our best friends’?’

Apparently, we do and we’re pampered to pay through the nose for them. We may be having bad times economically, but try telling the London dog lover convinced that Fido’s energy levels would benefit from crystal therapy or that counseling would help Spot emerge from his emotional cul de sac. Edells claims he has never tried to tot up what his pet costs him every year, but a quick rundown of JJ’s routine shows this urban dog’s life doesn’t come cheap.

While Edells likes to walk JJ himself in the mornings and evenings, like many busy Londoners, he employs a dog walker to take him out during the day. JJ apparently favours places of historical interest and is particularly partial to Richmond Park, Kenwood House and Hampton Court Palace.

Then there’s the grooming – no small consideration for a long haired Weimaraner. JJ’s groomer spends four hours every fortnight shampooing, conditioning, drying, brushing and buffing his charge. After all, when your owner is the proprietor of Pet Pavilion, it simply doesn’t do to be seen around town looking like Lassie after a dramatic river rescue.

And the evidence is that JJ is not alone in having an owner with both the income and the inclination to give him the very best of everything. Although our increasingly hectic urban lifestyles and tiny urban flats should have put this off the dog long ago in favour of the smaller, less time consuming cat, it would appear that we’re as keen as ever. Last year the Pet Food Manufacturers Association estimated that 4.8 million UK households had a dog, roughly the same statistics as for cats.

Beverly Cuddy editor of Dogs Today agrees that people are still canine obsessed. ‘People normally begin subscribing to our magazine when they acquire a dog and we’ve just had an 11.4 percent rise in circulation’, she says. ‘I don’t think the magazine has suddenly got better so as far as I am concerned, there’s a dog boom going on’.

And once we’ve acquired our four legged friend, it would appear that we’re absolutely determined to spend as much money as possible on him. Woof Woof, a new pet boutique on the King’s Road, is shifting Parness dog perfume and Harris Tweed coats by the truckload. And The Dog House which relies on London for 95 percent of its business already has its training courses booked up until October. Meanwhile, the capital’s top dog walkers and groomers are all being very selective about which clients they take on, mainly because they can afford to be.

So why are we Londoners prepared to spend so much money on our dogs? After all, Rover won’t know the difference between a Burberry bed and a bathmat, nor will he be bothered if you spray him with dog perfume or flea repellent. He’s unlikely to be psychologically scarred if you fail to buy him Louis Vuitton leash and while you may be desperate for him to have the same haircut as Geri Halliwell’s dog Harry, it’s a fairly safe bet that he isn’t fussed.

‘The reason people are spending more on their dogs is quite simply because they want to show how much they love them,’ says psychologist Dr June McNicholas, an expert in relationships between humans and animals. ‘There’s a popular theory that, as the birth rate drops, dogs have become a substitute for children – but there’s no evidence for that. What seems to be true is that as our human relationships become increasingly conditional (you’re only loved if you’re pretty / rich / intelligent / successful enough), we are seeking unconditional love from our pets, a caring relationship without risks. There’s also the guilt factor. When owners don’t have much time to spend with their pet, they’ll tend to compensate by spending a lot on the animal’.

But however much we spend on our four legged friends, we have a long way to go before we catch up with the Americans. While the London pooch still finds it hard to get into the capital’s top hotels, his New York counterpart is welcomed with open arms and possibly offered his own room service menu, toothbrush and shiatsu massage. The W hotel, Union Square, offers a ‘Bowow Concierge’ who can organize a trip to the doggy spa, a hot oil fur treatment or a Poochie Sushi snack. The TriBeCa Grand and Soho Grand provide pet taxi services, while the Ritz Carlton on Central Park South woos furry guests with gold plated ID tags and dinner served on a hand painted ceramic plate.

Neither have we lost our grip on reality sufficiently to subject our pets to plastic surgery (although this is probably only because the UK Kennel Club rules forbid show dogs from being cosmetically enhanced). In Los Angeles, eye tucks for dogs are readily available and for the dog who suffers a loss of self esteem after having been neutered, help is at hand in the form of a couple of implanted ‘neuticles’.

Barking mad? Clearly, but where the US leads, we have a tendency to follow. So if JJ fancies a tummy tuck or a bit of lipo in a couple of years time, chances are he’ll be spoilt for choice.

Pet Pavilion and Woof Woof are the most up market pet boutiques in London and there’s some intense rivalry (all very Best in Show). Both outlets have extensive ranges of designer toys, chews, bedding and jackets. In terms of doggy beauty products, something tea tree or lavender based is the thing to be smearing over Fido this month. Camomile paw balm is in, as are denim collars. Pet Pavilion offers a grooming and pet parking service (for those days when over just can’t bear the schlep round Chelsea), while Woof Woof stocks doggy inspired knickers (for the owners rather than their dogs).

Although Gucci has discontinued its doggy line, Burberry still does beds and jackets, while Louis Vuitton is still more than happy to flog you something monogrammed, starting with a collar at £77 and going all the way up to a dog carrier for £590. The big story, however has been Oh My Dog! fragrance. It’s apparently so good that owners are wearing it, too. Charlize Theron and Vanessa Paradise have agreed to be spokeswomen for the brand in the US and France respectively. No dog should be without it.

Any self respecting London Pooch should have been clipped or coiffed by David Fielding – the Daniel Hersheson of the dog grooming world. Geri’s Shih-Tzu, Harry, has had an appointment, but Fielding prefers not to talk about it. Apparently, the natural or slightly cropped look is big right now. Fancy feathering should be undertaken with caution, while comedy cuts and dyeing are big nos.

Richard Allport is an extremely sought after vet who offers alternative therapies to anything smaller than him at the Bayswater Referral Clinic. Is your dog afraid of thunderstorms? Then it’ll be a Bach Flower remedy you’re after (also good for jealous cats, apparently). Does he have an obsessive / compulsive disorder? Aromatherapy is the way forward. A joint problem? Try crystal therapy. Initial consultations (about 40 minutes) cost £120.

If David Fielding is the Daniel Hersheson of the grooming world, then Roger Mugford is the Raj Persaud. In addition to his work as behavioural scientist at the Chertsey Animal Behaviour Centre, he is often called as an expert witness when an animal is involved in a court case. Has got involved in the case of a Hampstead man who bought his wife a dog and then claimed custody when they split (she won). When one of Freddie Mercury’s cats (Sam, a ginger tom) decided to move out after the singer’s death, Mugford was called upon to give his opinion on where Sam’s best interest lay. A spiritualist later got in touch to say that Freddie had been in contact from beyond the grave to say what a good job he’d done – it’s always nice to have your service endorsed posthumously by a celebrity.

Most dog experts agree that London isn’t the ideal place for dogs. They get stressed by the traffic, allergic to the pollutants on spend too much time on a lead. Which is why Mark and Gillian Thompson decided to move from London and buy a great swathe of Carmarthenshire countryside and set up The Dog House. ‘We’re not a kennel because we give the dogs that stay here massive amounts of one on one attention, but neither are we a chi chi pampering palace’, says Gillian. In addition to offering six week training courses, The Dog House also provides activity holidays (while you go off on your holidays, Fido gets to charge round the Welsh countryside). Not only will he picked up from Hammersmith in a specially designed, air conditioned Mercedes van (complete with individual traveling beds, food bowls and music), he’ll also be sent home fully groomed and with a report card to let you know what he’s been up to.

The K9 to 5 Club is officially a dog walking and sitting service, but is more like a private members’ club (not least because it only accepts clients from Kensington, Notting Hill, Knightsbridge and Bayswater). For £238 per month (when you book for the year), your dog will be picked up and walked on weekdays for 52 weeks of the year. In addition, he’ll be issued with a goody bag on joining and you’ll be issued with A Dog’s Life (like a baby book). Oh yes, ands if he’s very lucky he may get put in a group with Jenny Seagrove’s Spaniel, Kizzy.

What’s that: you’ve never taken your mutt to a dog pool? You bad dog owner. The biggest and best pools are out of town. Therapaws at Sidlesham (near Chichester) is one of the biggest at 30 ft. A 20 minute swim costs £4.50. You could also try Woof ‘n’ Water near Deal or Buckhurst Farm in Kent, which boasts its own dog Jacuzzi.

We may be a city of dog lovers, but nobody seems to have told the big hotel owners. The only really swanky hotel where you can hang out with your dog is the Lanesborough and it doesn’t like to advertise the fact. But it’s butlers are fully clued up on all things dog related and can find you anything from a slice of dog friendly chocolate cake to a poodle.

back to ‘In the News’ 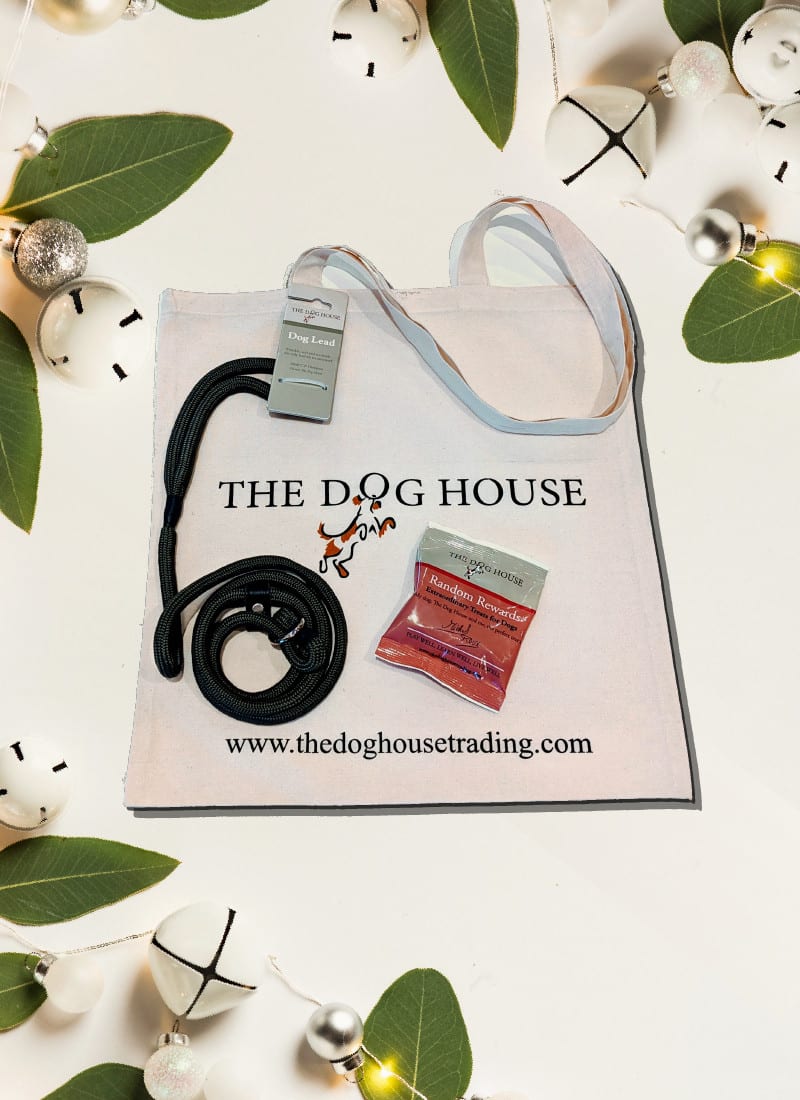 A GIFT FOR YOU

Spend £10 or more today and receive a free gift (worth £10) PLUS free shipping.

WHILE STOCKS LAST, LIMITED TO ONE PER CUSTOMER